Becoming a Leader as a First-Generation Immigrant 7 Minute Read

Helena Seo  1
Since I joined DoorDash back in January of this year, my utmost priority has been to build up the design team. Hiring is one critical part of the effort to support the company’s exponential growth, but equally important is the team’s career development. Based on the team’s overall feedback, we identified a clear need to establish a career ladder framework that would help designers better understand where they stood in their career and what they needed to do to develop themselves further. I decided to take a design-thinking approach to this task, and went through a problem-solving process similar to the one we use for our design projects: I defined the audience and their needs; set clear benchmarks and design principles; and generated solutions. Finally, I tested each one then iterated based on the results.

Audience and their needs

I identified three audiences who would use the career ladder: designers, managers, and HR. I also captured what each audience cared about the most:

Most career ladders I’ve seen are written in the form of a spreadsheet or a doc like below. The spreadsheet is most common because its grid format makes the presentation of the rubrics easy. 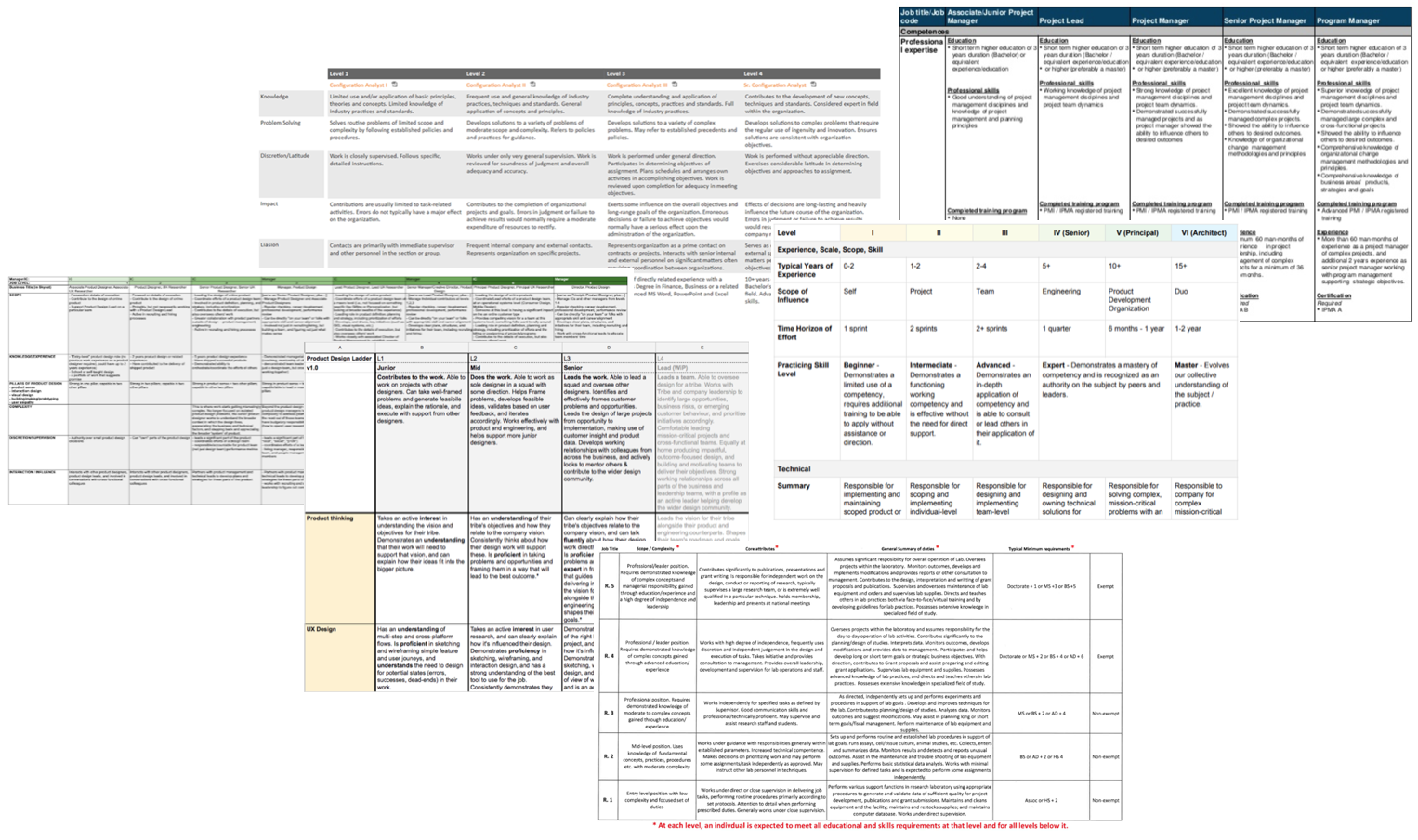 For the Product Design positions, the rubrics usually consist of multiple criteria per level, such as tenure (years of experience), execution, product sense, communication, complexity of the role, scope of influence/impact, collaboration, contribution to culture, etc. But I found that usually these criteria were tightly interconnected and clearly isolating each rubric per level seemed nearly impossible. For example, scope of influence can’t be explained without accounting for someone’s product sense and communication skills. Also, as you move up the career ladder, not all criteria hold the same weight nor do all skills grow equally. For example, design execution chops become less critical when you’re leading a team. I wanted to design a solution that is simpler and easier for the audience to consume and comprehend. I also wanted to design it to be better than another mundane spreadsheet - after all, not only is this meant for designers, but I am a designer as well.

There were three design principles I considered:

There was no clear value in introducing complex rubrics at each level. Simpler structure equals to easier comprehension. I hoped that simplified content would also encourage more frequent conversations between managers and designers.

By showing the overall structure of the career ladder and describing what it takes to get to the next level, I wanted to make sure the relative state of each level was clear.

Unlike many other existing docs that looks like a performance criteria guidance, I wanted to help the team imagine the persona of each level as they read it.

I chose to use a Google doc because it helps the narrative be more conversational. It also made sharing with the team easier. There were many iterations of content and form designs over a couple of months, but here’s a glimpse of the final solution at a high level. Similar to any good guidebook, the document opens with a table of contents for easier scanning of the content and navigating through different sections. Next comes the purpose of the document and how it should be interpreted and used. The below visualization is the overall structure of the ladder and how the influence radius changes as you ladder up. This visualization provides the context of each level, and helps the HR team contextualize the Design team’s level against the rest of the org’s. It was also important to explain what it means to take an Individual Contributor (IC) career path versus a People Management path as well as the commonalities and differences. 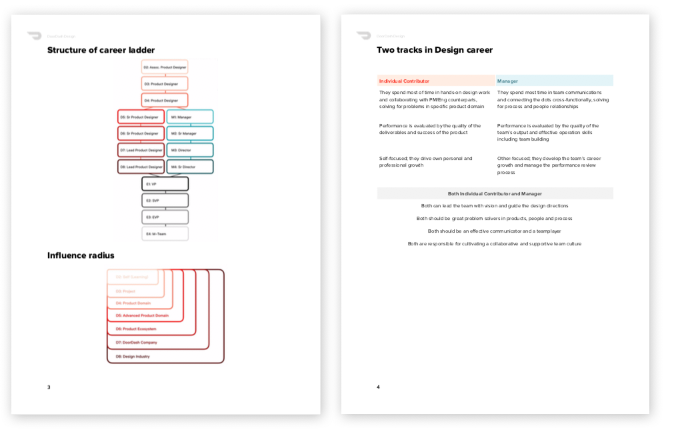 As to the actual job ladder definition, there are four sections describing each level: Profile, Hard Skills, Soft Skills and To get to the next level. Profiles generally describe the key attributes of each persona. “To get to the next level” is meant to help designers identify their development area while it helps managers crystalize the promotion criteria for their team members.

There’s a separate chapter for People Managers explaining the general philosophy around culture, people management, and team building. Each level description is laid out similar to ICs but the difference is that it's more focused on Responsibilities than Skills because many skills are overlapped with the equal-level ICs. 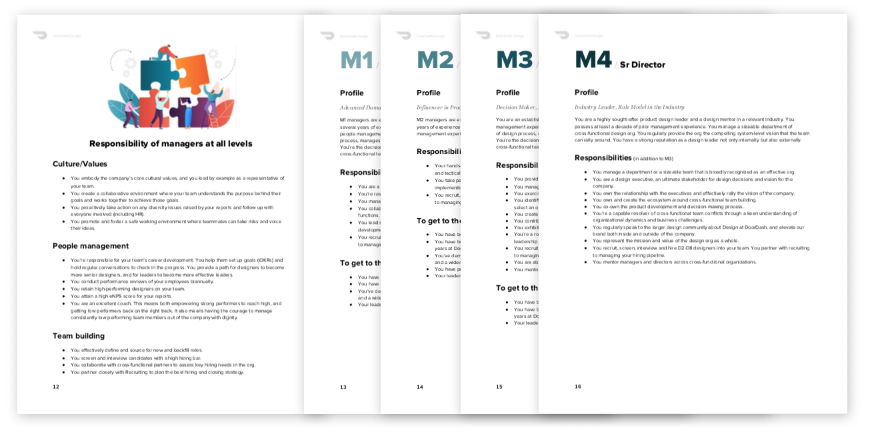 This ladder was rolled out to the team in June, in time for our mid-year performance conversations. So far, the team’s feedback has been positive, and it’s been a useful guideline in career conversations. Just like any other design process however, I anticipate it will continue to be iterated upon as the team and the company evolve over time. As with any product, career ladders wouldn’t be very useful if there are no active follow-ups with the audience. After the rollout, I’ve been holding weekly office hours to make myself available to anyone who would like to have a conversation about their career. We’re also planning to develop a similar document for our other UX functions like UX Research and UX Content Strategy.

Some interesting decisions and learnings

I feel privileged to establish a foundation of the design team’s career ladder definition at DoorDash. For other design leaders who also have gone through similar exercises and challenges, I’d love to hear your wisdom and learnings. For the designers who have seen career ladders in the past, what are the most important things you’re looking for in such documents, and what matters most to you? Please share your insights in the comments below! Special thanks to Tae Kim, our amazing Content Strategy lead at DoorDash and Justin Steffen, my awesome HRBP, for helping me with this article.
Comments

Learn more about what triggered the DoorDash May12th outage

Expanding internationally requires overcoming several technical obstacles. Learn about all the challenges and how DoorDash is tackling them

As applications grow in complexity, memory stability is often neglected, causing problems to appear over time. When applications experience consequences of problematic memory implementations, developers may find it difficult to pinpoint the root cause. While there are tools available that automate detecting memory issues, those tools often require re-running the application in special environments, resulting ...

“What would happen if we removed statement timeouts in our Postgresql databases?” That’s one of the questions asked in a management meeting. At the time I only responded that it would be bad — it would cause problems and make it harder to debug. However, I realize now that this is a topic that many people don’t ...

From a product engineering perspective, external partnerships can be tricky. Here are four best practices to follow.

All types of Dashers use DoorDash on a daily basis to complete deliveries. Some people drive cars, while others use bikes, motorcycles, scooters, or even walk. Each form of transportation has its own unique set of skills. Scooters can go through traffic easier, but are limited in the size of food they can carry. Bikers ...

From Monolith to Microservices: Reducing the Migration’s Pain Points