Becoming a Leader as a First-Generation Immigrant

Becoming a Leader as a First-Generation Immigrant 7 Minute Read

Although we’re living in an era in which many companies advocate for diversity and inclusion, I am often still the only female director in the room in the tech industry. Even more often, I find myself to be the only first-generation immigrant who learned English as a second language.

This is interesting given almost 27% of the population in California is foreign-born immigrants and 45% of people speak a different language at home.

Was I luckier? Was I smarter? Probably not.

I have been pondering what made me different and how I leveraged my unique immigrant experience for the last 20 years in the U.S. I hope that others like me can benefit from my story. 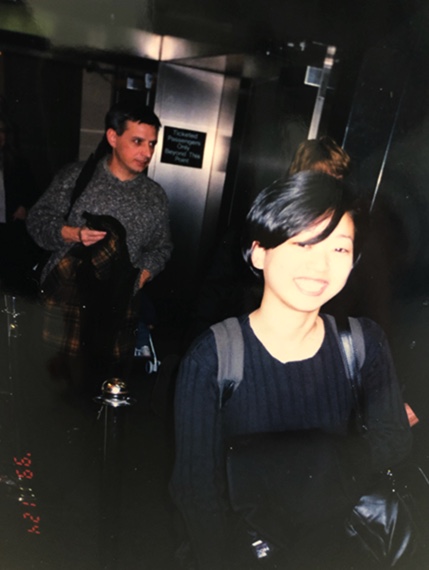 Once upon a time in 1999, I flew from Korea to San Francisco with only a single piece of luggage in my hand. Many people would say this sounds like the American dream.

But living and studying in the U.S. wasn’t all unicorns and rainbows. Overcoming the language barrier was harder than I’d expected. Grammar was all backwards from Korean, and there were so many words, idioms, expressions and nuances I had to learn from the scratch. My brain, ears, and mouth always seemed uncoordinated. I always felt overly self-conscious about my word choices, and I worried whether people even understood me. Looking back, it probably took me 10+ years to feel comfortable ordering a pizza over the phone.

Cultural adjustment was even harder. When I was growing up back in Korea, I was trained to listen and read between the lines. Classes were usually one-way lectures, and I didn’t learn how to form and express an original opinion. Being opinionated or expressing emotions was considered rebellious, pompous or rude.

When I studied Design at the California College of the Arts, I behaved like the good student I was taught to be — obedient and hard-working. However, professors used to put me on the spot for being too quiet in the corner. I felt guilty for not being able to contribute in class, but it was even more terrifying not to know how to behave differently.

There were numerous times when I wanted to leave it all behind and go back to Korea where could comfortably blend in with people who had similar backgrounds, spoke the same language, and understood me for who I was. However, I didn’t like the idea of resigning and was determined to stand on my feet in the U.S.

20 years later, I’m glad I didn’t give up, and I treasure those difficult yet unique experiences that helped me become the person I am today. There are many things that I learned to appreciate because I’ve lived a foreigner’s life. They also influenced my leadership style in the following way:

My constant worry that people may not have understood me and the realization that I could no longer just “read between the lines” has turned me into an over-communicator and a straight shooter. I would rather be a leader who is an open book than a mysterious black box. I find that proactive communication and directness helps get people on the same page faster and prevents second guessing. It’s important for me to know that my team stays up to date so they can make the best informed decision, and I don’t become the blocker of critical data.

Because English is a second language, the reality is that I will never be as eloquent or inspiring with my words as native speakers. Realizing this helped me develop into a doer with a strong bias toward action. I don’t feel as engaged sitting in meetings full of endless philosophical discussions that don’t lead to any progress. I’m most satisfied when we get down to actually solving the problem and moving the needle. I also love working with and hiring other doers who can move mountains with me in the most productive and efficient way possible. Because of this trait, I feel I am most useful in situations where execution is key.

Vividly remembering the devastating feeling of “I’m not understood for who I am” taught me the importance of creating an authentic environment where everyone is accepted. This includes individuals’ different backgrounds, characteristics, strengths and weaknesses. People can only excel and perform when they can be who they are. Pretentious, disingenuous culture is toxic, and it makes people focus on things other than the quality of work itself. I strive to build an open, honest, and transparent culture where everyone feels safe to make mistakes, freely talk about their experiences, and learn from each other.

Having been the vulnerable person who was silently sitting in the corner, it’s important for me to include everyone in the room. I love leading discussions where everyone felt their voices were heard (introverts and extroverts alike) and they contributed to something big and meaningful. This doesn’t mean including everyone in every meeting and asking everyone for their opinion. This means that meetings need to be more thoughtfully and intentionally “designed” — from room/location, time, duration, agenda, and attendees. Even small things like sending the agenda in advance and recapping the meeting outcomes afterwards helps every meeting become more inclusive and participatory.

I always picture what each meeting will look like in my head before scheduling it. What are the potential conversation dynamics and outcomes? What should the tone of the discussion be? Whose voice will be loudest in the room and who might feel more isolated? Some may think this is overly calculated, but I believe this is the minimal amount of preparation you need to do as an empathetic leader.

In Korean, there’s a concept called “noon-chi.” It’s almost impossible to find the exact equivalent in English, but the best possible translation is probably “tact.” It’s the skill of reading between the lines and acting sensibly based on a tactful interpretation of the situation. This is the virtue I was taught in Korea. It’s the sixth sense that enables you to read people’s emotional states and relate to them. When noon-chi is combined with empathy, authenticity, and self-awareness, you can lead teams with high emotional intelligence.

Emotional intelligence also isn’t a mythical qualification for leaders and managers. It’s something we should be looking for in every hire because they are our future leadership bench. In interviews, I try to keenly observe the following things about each candidate: Do they interact with team members respectfully throughout the process? Are they self-aware? Do they want what we’re looking for? Can they put themselves in other people’s shoes? Even small things like turning their laptop screen toward others (even if it means they have to read their presentations upside down) go a long way.

There are a lot of first-generation immigrants in the U.S., yet it was hard to find an article about everyday leadership by immigrant leaders.

Hopefully this article will shed light on the subject from a different angle and inspire others who are going through similar experiences. I’d love to stay connected in the immigrant design community and learn from everyone’s stories. Ping me if you are interested in having a conversation!

Special thanks to Tae Kim, our amazing Content Strategy lead at DoorDash for lending me a hand on this article.

Interview with Rajat Shroff – VP of Product at DoorDash

Learn more about the product design team at DoorDash

DoorDash recaps a number of its engineering highlights from 2020, including its microservices architecture, data platform, and new frontend development.

Why Burnout is Hard to Detect

Learn about DoorDash's newest international engineering hub and our plans for improving delivery and building a remote friendly workplace.

How to Prepare for a Technical Interview

Follow these helpful tips when preparing for DoorDash's technical interview.

Overcoming Imposter Syndrome When Starting a Career in Tech 

Imposter syndrome can affect anyone but is especially prevent in the fast moving tech industry. Learn how to overcome it in this new guide

DoorDash announces the opening of its newest engineering office, based in Los Angeles.

Learn about the DoorDash product organization: their mission goals and culture