A Framework For Speedy and Scalable Development Of Android UI Tests

Nishant Soni is a software engineer at DoorDash.

Nishant Soni
Fast feature development and productivity for mobile engineers has long been held up by mobile UI testing, which is a slow but essential process. While new automated UI testing technologies like UI Automator or Espresso have helped developers write UI tests, these tools do not keep the code clean, organized, and easy to read. This ultimately hurts productivity and scalability and continues to make UI testing a development bottleneck.  Fortunately, companies struggling with UI testing can enhance UI test automation tools by using a Fluent design pattern to create easy to read, manageable tests that are fast to implement and will enable scalability.  At DoorDash, testing all the UI scenarios of a new build would take two full days for three developers and one QA, which slowed our development cycle to one release every two weeks. This process, while essential to catching harmful user bugs, hurt the team’s morale and productivity overall. To solve this problem we built a Fluent design pattern-based framework that enabled us to utilize UI automation tools by making tests easy to read and scalable.  To demonstrate how we increased our testing velocity we will first go through the problems with using UI Automator and other approaches to testing. Then, we will introduce design patterns, Fluent design patterns, and how we implemented these at DoorDash

The challenges of UI testing

Fast, scalable UI testing is a key challenge in ensuring mobile app development is bug-free, because test automation tools do not produce easy to read, scalable tests and alternatives are equally time consuming.  While tools like UI Automator or Espresso using Android Studio have made it easier for engineers to start writing tests on Android to simulate user behavior, on their own the tests are difficult to understand and manage at scale. While testing may be fine at the start, increasing the number of tests makes it more difficult to understand the test code, causing a maintenance problem in the long run.   Test automation tools can produce test code where each action is described in three to four lines of instructions, rather than having concise lines with clear descriptors, using business language, as shown in Figure 1, below: 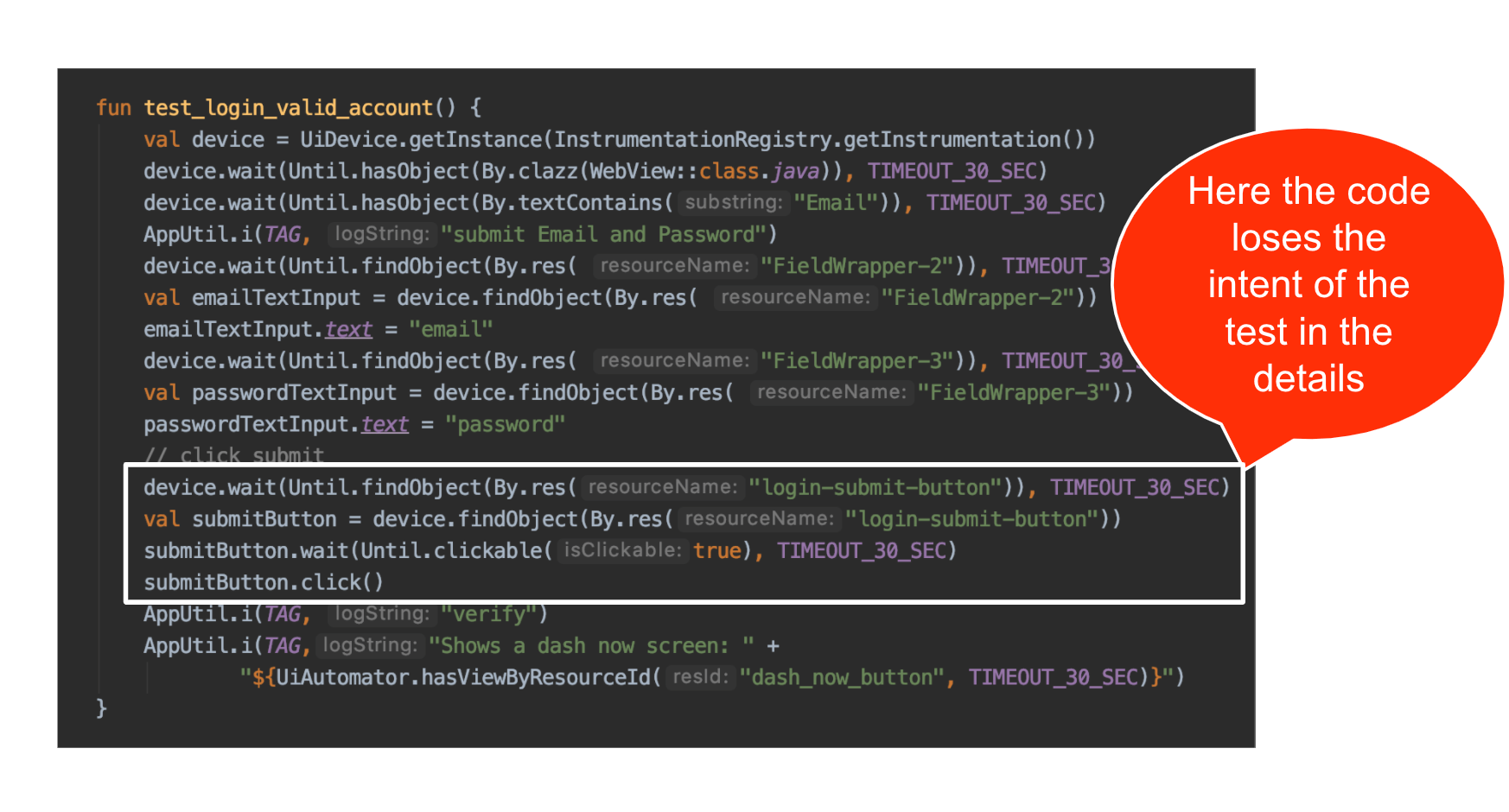 Figure 1: Automation tests created without a design pattern can result in obscure code that does not state the intent of the test.

The alternative to using automated testing platforms is to outsource to manual testers. Unfortunately, this does not really save time because manual testers require knowledge transfers and managing the delegation takes almost as much time and effort as having developers do the testing themselves. Additionally, manual testing is not as accurate as automated testing, as it allows for more  human errors, and it is  not cost effective for high volume regression.

How a design pattern can help with UI automation

The issues with manual UI tests can be addressed by choosing a good design pattern and the right framework for UI testing. A good automation test framework should allow engineers to write tests that are: There are several design patterns that are commonly used for web automation tests, the most popular being the Page Object pattern described by Martin Fowler in 2013. Applying this design pattern to the example in Figure 1, above, we can see a definite improvement in readability of the test code, as shown in Figure 2, below:

Figure 2: An automation test using the Page Object pattern produces a better organized and more concise test than in our previous example.

The code in Figure 2 looks a lot better than what we started with because: However, there are still some challenges to adopting a design pattern like this:

Using a Fluent Interface to highlight the business logic

A Fluent design pattern provides us with the best of both worlds, as it demonstrates clear intent by using domain-specific language. A Fluent Interface is an object-oriented API whose design relies extensively on method chaining. The goal is to increase code readability by using domain-specific language, allowing the relay of the instruction context of a subsequent call.

Here at Doordash, we had been using TestRail for manually testing the app before every release. It used to take three software engineers and one quality assurance engineer to go through the TestRail tests and half a day each to run the tests, taking two full work days. This process limited our app releases to every two weeks.  Establishing a new UI automation framework for Android eliminated these pain points for release cycles. We will now go into a bit more detail to explain the approach and tooling we used, the overall high level solution architecture, and share some best practices.

Generally, every UI test scenario involves interactions with activities and screens; on each screen the user will take some action and expect some behavior as a result. We then use assertions to verify the results.  To conduct these tests, we structure the test code in such a way that each screen encapsulates the actions that are performed on that screen and can verify the behavior after performing those actions. All interactions are named in domain-specific language using the Fluent design pattern interface, as shown in Figure 3, below: 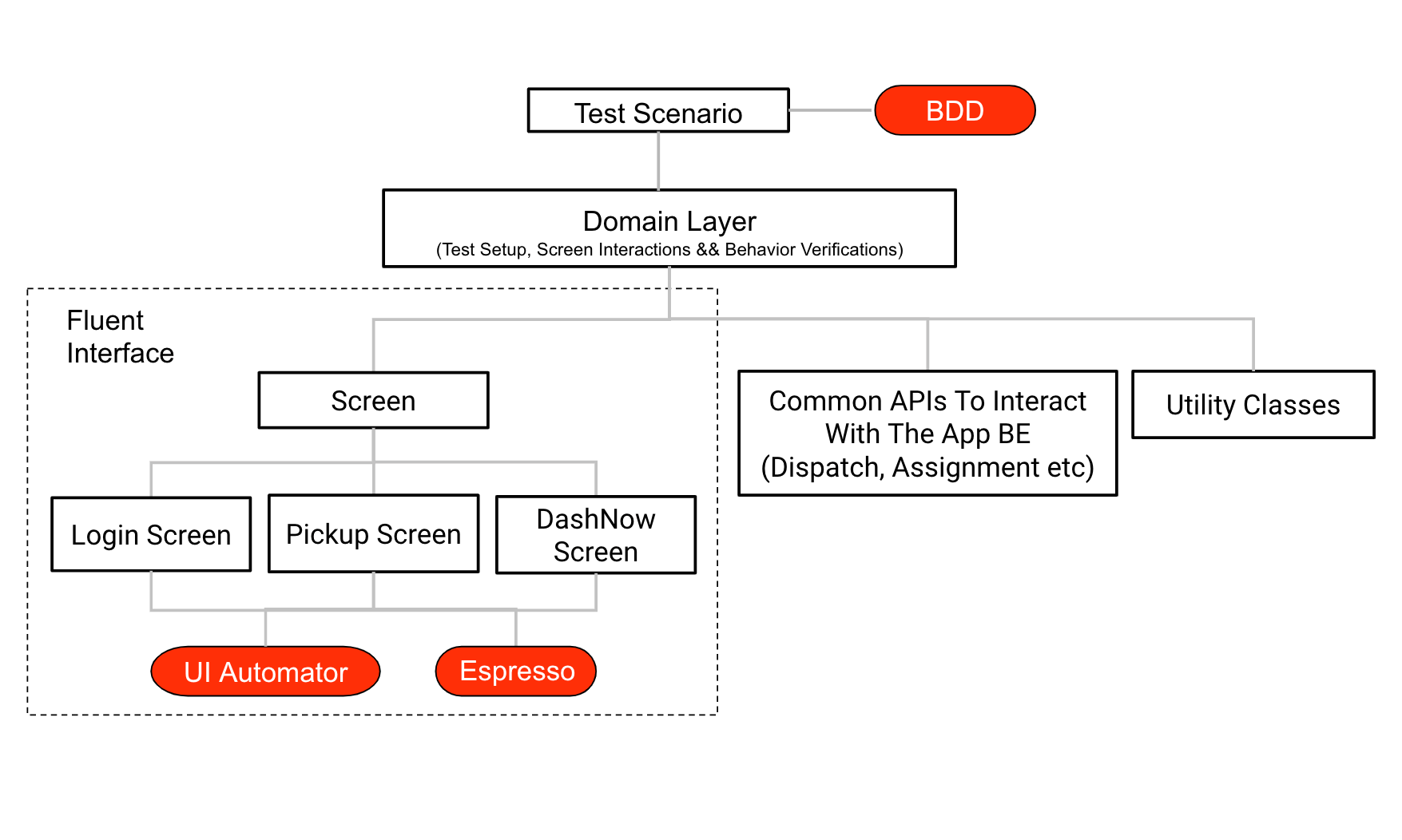 Figure 3: In our UI automation framework for our Android Dasher app, we use a Fluent design pattern to name interactions in our domain-specific language.

Tooling choice plays a big role in improving developer productivity. We find that our tooling proves easy to work with and has good online support.  UI testing tools: Before developing our UI test procedures, we considered different tools for writing UI tests, such as Appium, a third-party tool. However, we found that Android’s native tools were easier to use and had better support. There are two UI testing tools supported by Google, which can be run separately or together, since they run under the same instrumentation test runner: IDE: Target test devices: CI/CD:

We write test scenarios, shown in Figure 3, above, in a domain-specific language following a behavior-driven approach. These tests use the test setup API to create the environment for a particular test and use screen objects that interact with the screens and verify actions. Screen interaction and verification are ultimately performed through a test automation tool, such as UI Automator, Espresso, or any other similar tool.  To understand this process, let’s look at an example for the login flow of an app using a Fluent design pattern and our testing architecture described above. Login test:

The test in Figure 4 is written using the Fluent design pattern, and the base class that enables this pattern is called Screen.kt. The code for Screen.kt is shown in Figure 5, below: 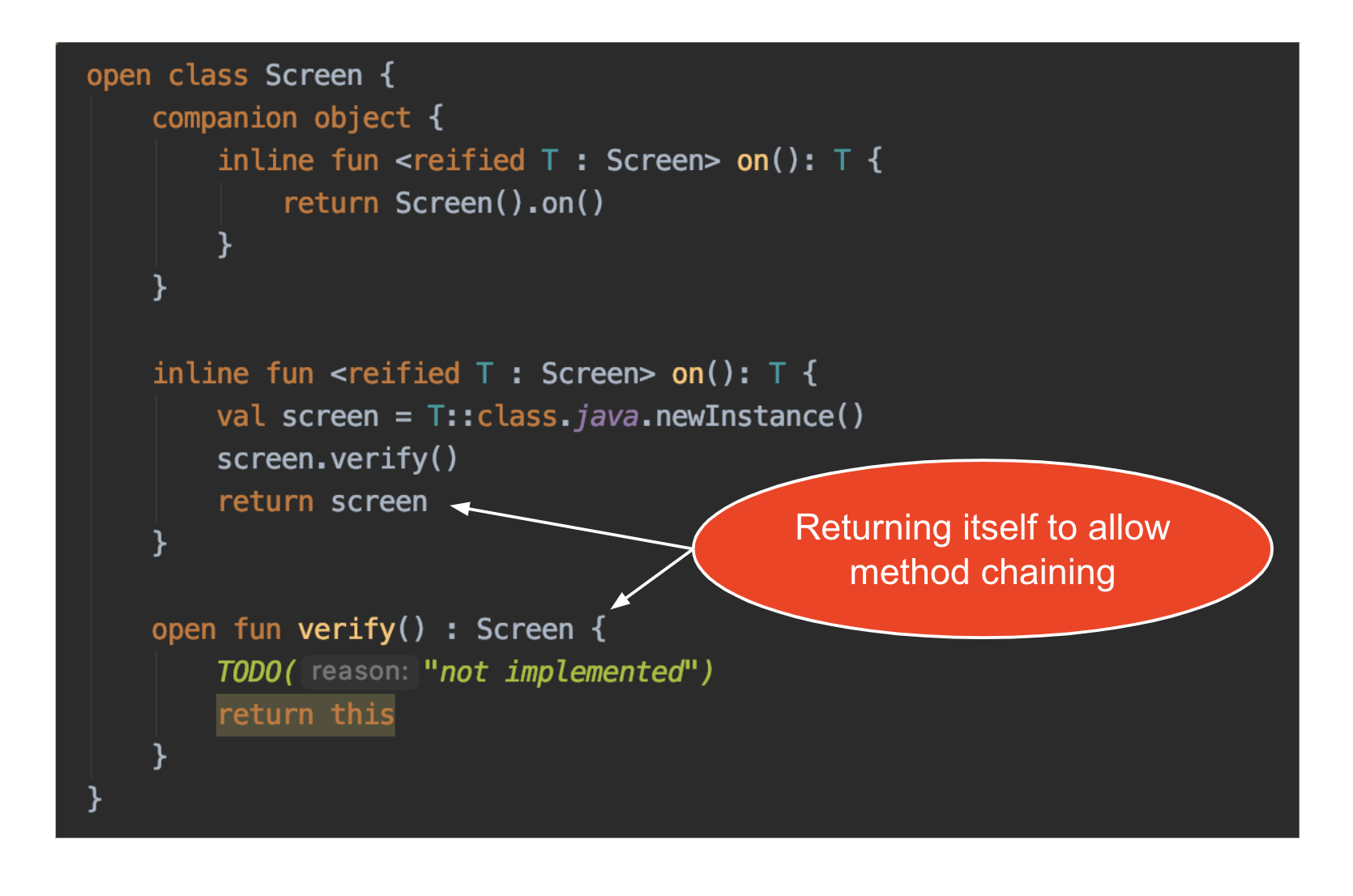 Figure 5: The Screen.kt base class enables the Fluent design pattern.

All the screen classes extend this class and follow the pattern of returning itself for each interaction/verification function, thereby passing the context along. The inline generic method “<reified T: Screen> on()” is used to switch context from one screen to another. An example of the “Screen” implementation is shown in Figure 6, below: 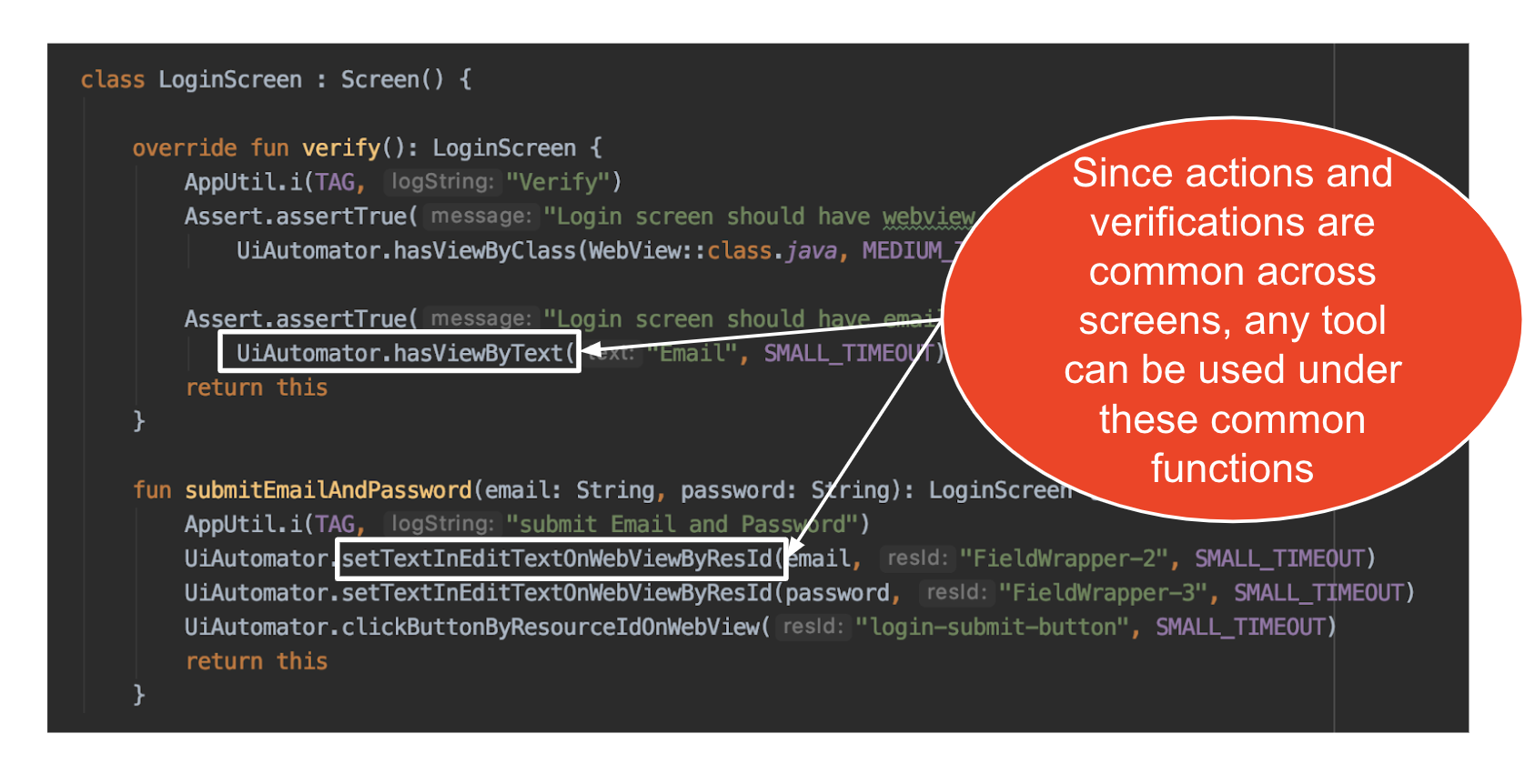 Figure 6: While the LoginScreen class is being implemented with UI Automator in this example, it could easily be replaced with another tool for the same action but with a different approach.

The above implementation uses the underlying tool, UI Automator, to actually interact with the screen. While this example uses UI Automator, it can be replaced with Espresso or any other similar tool without affecting the business logic or test expectations.

For clean coders and software crafters, the primary property of a package is the possibility to have a meaningful name that describes its purpose and its reason for existence. Therefore, we have organized our packages as follows: 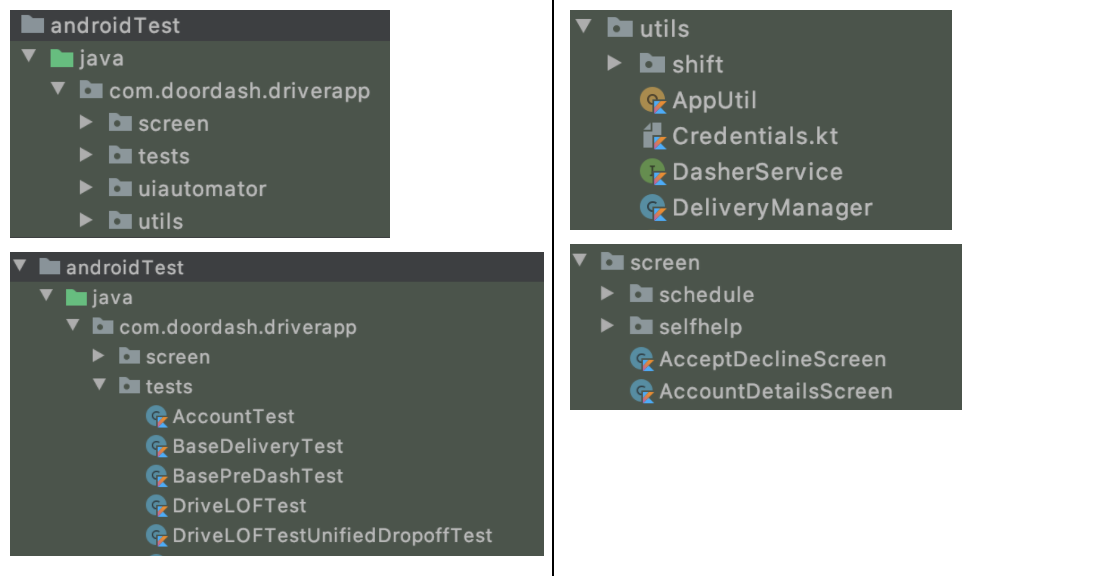 Figure 7: We organize our packages in a manner that allows for meaningful naming.

Best practices for using this approach

While writing these tests we developed a few best practices that helped us keep our code clean, readable, and extensible. Here are a few that we follow:

Figure 8: Including a failure message in assertions makes it easy to troubleshoot failed tests.

Once the initial framework was set up, we finished 70% of our regression tests in two months. Here are some of the results:

Using the Fluent Interface for UI testing freed engineers from repetitive and time-consuming tasks, allowing for more time to solve tricky edge cases. Improved code coverage and running the automated test for regression testing ensured the robustness of our Android Dasher app.  Since the code structure is agnostic to the underlying testing tool (UI Automator or Espresso), we can easily adopt any better tools released in the future.
Comments

At DoorDash we are consistently making an effort to increase our user experience by increasing our app’s stability. A major part of this effort is to prevent, fix and remove any retain cycles and memory leaks in our large codebase. In order to detect and fix these issues, we have found the Memory Graph Debugger ...

How the SwiftUI View Lifecycle and Identity work

we compare UIKit’s event-driven approach to SwiftUI’s data-driven one, then dive into the SwiftUI view cycle, identity, and rendering process

Adding the concept of Theming to DoorDash's design language system made it easier for engineers to use standardized design elements in all of our products.

Avoid challenges in user experience, payment methods and fraud when implementing payments to an android with these 8 learnings.

Today at the World Wide Developer’s Conference, Apple revealed some of the newest features of their upcoming iOS 10 platform. One of their most exciting features is for app developers to be able to integrate with iMessage. We are currently working on supporting this new functionality in the DoorDash iOS app, and during the keynote today ...

Earlier this year, at Apple’s Worldwide Developer’s Conference, we demoed a way for DoorDash customers to place group orders directly from the new iMessage app. After polishing up the feature for the past few months and seeing the successful roll out of the new iMessage for iOS10, we’re excited that DoorDash for iMessage is now available with ...

Your Deep Links Might Be Broken: Web Intents and Android 12

By Rohan Shanbhag and Wei Lin, Software Engineers Most Android apps rely on network calls to a set of backend services. As an app grows, so does the complexity of network calls and data operations. Networking libraries like Retrofit and Volley provide all the functionality needed for basic API calls. However, for threading and sequencing of events beyond a ...

Learn about DoorDash's journey exploring programmatic scrolling support in swiftUI. Check out the open sourced solution in this guide